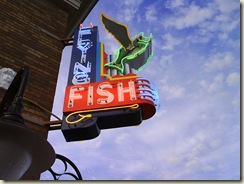 Flying Fish is a quaint seafood restaurant that had the same look and feel as a restaurant off of a wharf in San Francisco or San Diego.  It's definitely a Chip and Fish feel.  This particular establishment is located in Garland at the Firewheel Town Center.  There's actually several good restaurants here so it's a good place to go to try out different types of food.  So what does the food look and taste like? 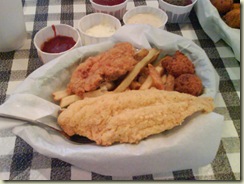 Let's start with the Cons.  I didn't care for the fried catfish that much.  The batter was very crispy and tastes great but the fish was well, fishy.  Let's just say I thought Long John's Silver was less fishy.  Now the Pros.  What was surprising was that the Chicken Strip was awesome.  Also, the hush puppies was very good.  Breaking the hush puppies open, it had a good density and pieces of corn can be seen.  Of course it is not that good that a fish and chip place doesn't have that good of a fish but I will have to give them another chance.  I will still need to try the crawfish chowder and maybe a basket of chicken strips next time I show up.  Would I recommend this place?  Not just yet.  Stay tune for an update in the next couple of weeks or so.

UPDATE: So we went back and ordered Chicken Strips, Shrimp, Grilled Catfish Baskets, and Crawfish Chowder.  The chicken strips and shrimp were good as usual.  The grilled catfish fillet was good and tasted better than the fried catfish last time.  It was moist and flavorful.  The crawfish chowder was also very tasty but it was hard to find the crawfish itself.  The chowder was very creamy and had the right amount of spice in it very much like Tabasco sauce.

Anonymous said…
My wife and I went on Thursday night. I had the all you can eat catfish and my wife had the grouper. All she orders now any time we go is the grouper. The first batch of catfish I had was fried to perfection. Second helpings on the catfish were over cooked. The second time I went I had their fish tacos which were excellent. I plan on trying their gumbo and frog legs next time. I'd rate them "good" overall.
August 5, 2008 at 12:06 PM 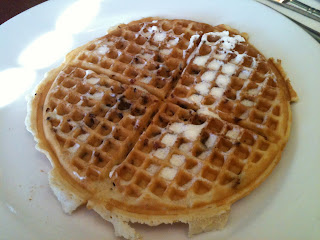 First the pros, the thick cut smoked bacon was fried to a crisp before being diced and added to the waffle batter.  With a generous helping of syrup, this waffle tasted exquisite.  Each bite awarded me a sweet, salty, and savory explosion. The only thing bad about this waffle was how thin it was.  Me, I'm all over the thick crispy Belgian style waffle. Maybe I should just make it myself. 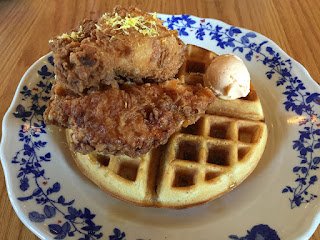